“Journey toward a transplant”: Part 1 of 2

Shirley Tyus is a lady full of poise and crystal clear priorities that guide her journey through life. One look at the glimmer in her eye and her confident smile, it’s easy to believe that she can take on the world.  Yet, her world was turned upside down and the path she was on became clouded when she discovered she had kidney disease.

“I first was diagnosed with kidney disease when I had a mini stroke two years ago,” stated Shirley. “I had one kidney with no remaining function and the other one was at 15 out of 100 percent. It was surprising to learn that I only had one kidney with any function. I didn’t have any symptoms.”

Without obvious symptoms, it’s easy for kidney disease to progress into complete, irreversible, kidney failure. When Shirley began to acknowledge the news regarding her diagnosis, she was angry. Her anger stemmed from the lack of information she’d been given over the years. 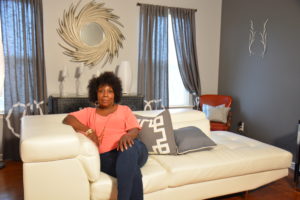 Unfortunately, Shirley was not aware that her history of uncontrolled high blood pressure was slowly damaging her kidneys. She abruptly found herself facing kidney failure with a multitude of questions and no clear answers.

Shirley was referred to a nephrologist after her mini stroke. “The minute my doctor explained I had 15 percent of my kidney function left, I wanted to know what we were going to do about it,” said Shirley. “The doctor just looked at me and didn’t offer a clear answer. I asked if she was just going to wait around until I had to be placed on dialysis before we ended up doing something about it.”

When it was apparent that Shirley’s questions were going to require more time and attention than what a standard doctor’s office visit could offer, the nephrologist referred her to Reach Kidney Care.

Reach Kidney Care is where Shirley met Ed Dennis, nurse practitioner, chronic kidney disease (CKD) care coordinator.  In their first meeting, Ed explained what the kidneys do, how they function, what it looks like when they start to fail, and how to keep them as healthy as possible for as long as possible.

After learning about kidney function and treatment options for kidney failure, Shirley decided that she wanted to explore transplant as a treatment option. Ed enrolled Shirley in an all-day transplant workshop where she was able to ask questions, speak to doctors, and sign up to be screened as a kidney recipient. After her screening, she was approved and accepted to the transplant waiting list.

Once accepted to the transplant waiting list, Shirley was able to recruit people to be screened as a potential donor. Shirley said, “My daughter was placed on the list as a potential donor and was the first to be tested. As it turns out, she was an exact match. God has blessed me that I didn’t have to stay on the waiting list long.”

Shirley’s daughter, Tanya, witnessed the toll that kidney disease was taking on her mother and she couldn’t sit back and let it continue. She knew she had to do something.  With the same fierce determination evident in her mother, Tanya explained she was ready, willing and able to get her mother fixed. She wanted her mother back.

Tanya explained to deal with the living donor transplant process, you need patience. “Once she was on the list, I had to call and express interest in becoming a donor. Once I expressed interest, they called me in a week to come in and do a blood test. Then, I had to go back and do a series of tests. Then, they let you know if you are able to donate. Just because you are a match doesn’t mean you are an ideal candidate. Thank God I was healthy enough,” claimed Tanya. “We finished testing in July and we were able to set the date for October 6, 2015.”

Shirley’s transplant is set for October 6. She admits that she is a little scared and a little excited too. And, in true Shirley fashion, she channels her energy through faith and the desire to help others. She is concerned about the many people who are seeking donors on the transplant waiting list. She offers these words, “I’d like to encourage those out there on the transplant list. There are donors out there. Remain hopeful. There is hope. Never give up hope.”

Two years ago, after suffering from a stroke, Shirley Tyus was diagnosed with kidney disease. Shocked by the diagnosis, Shirley set out to find ways to stabilize her health. In order to provide an extra layer of care team support, her nephrologist introduced her to Reach Kidney Care. With the help of her Reach care coordinator, Shirley learned strategies for maintaining her kidney function and treatment options for kidney failure.

After visiting a transplant seminar, Shirley decided that a kidney transplant before having to start dialysis would be ideal for her. Luckily, her daughter, who volunteered to be her living organ donor, was a perfect match. Many hours of testing later, the transplant was considered a “go.”

“My transplant was scheduled for October 6, 2015. I had prepared myself mentally for the procedure. I studied the paperwork and understood the process. I came to grips with the fact that this was a serious surgery,” said Shirley.

However, things were not going to go as planned.

On October 5, Shirley received a call. The voice on the other end of the line said, “Ms. Tyus, we are cancelling your transplant surgery.”

This unexpected news left Shirley confused and scared. “My first thought was, “Am I going to die now?” I didn’t really know what it meant to have the surgery cancelled so I didn’t know how to act,” said Shirley.

What many people may not understand is that with dietary changes, medication adjustments and lifestyle modifications, it is possible to maintain kidney function and delay the need for dialysis or a transplant. If a person is scheduled for a transplant and his or her kidney function improves, he or she may be removed from the transplant list.

Ms. Tyus’s transplant team had evaluated her lab work and found that her kidney function improved.

According to UNOS Transplant Living, “While you are on the waiting list, your transplant team will monitor you continuously to make sure you remain suitable for transplant. If your condition improves or complications arise, you may be taken off the transplant list.”

While it may not have been welcomed news at the time, not receiving the transplant was actually good news for Shirley.

“It’s really a wonderful thing that her kidney function improved. She doesn’t need to undergo transplant surgery until it is medically necessary,” said Christa Lawson, RN, BSN, transplant and dialysis care coordinator for Reach Kidney Care. “Just because she is not scheduled for a transplant right now, doesn’t mean that she won’t eventually receive the transplant.”

Shirley has recovered from the shock of the cancelled transplant. 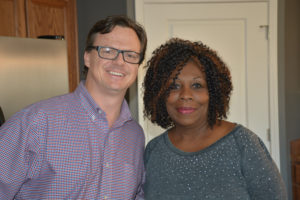 She continues to work with Reach Kidney Care to monitor her health.

“I still meet with the Reach team. They still have resources available to help me retain my numbers,” said Shirley. “They have a dietitian to answer the questions I have about what I should and shouldn’t eat.”

Shirley’s journey with kidney disease has not been easy. However, she’s found ways to overcome her obstacles.

“Reach kidney care has been a life saver for me. They have given me hope. When I first received the news about having kidney disease, it was devastating. I didn’t know anything. I thought my life was over. I fell apart in one day,” said Shirley. “So, it’s been my lifeline to really understand that this is something you can live with. Kidney disease is not a death sentence. It is a life sentence. You can do the things you want to do, you just have to do it a different way.”

Sorry, the comment form is closed at this time.